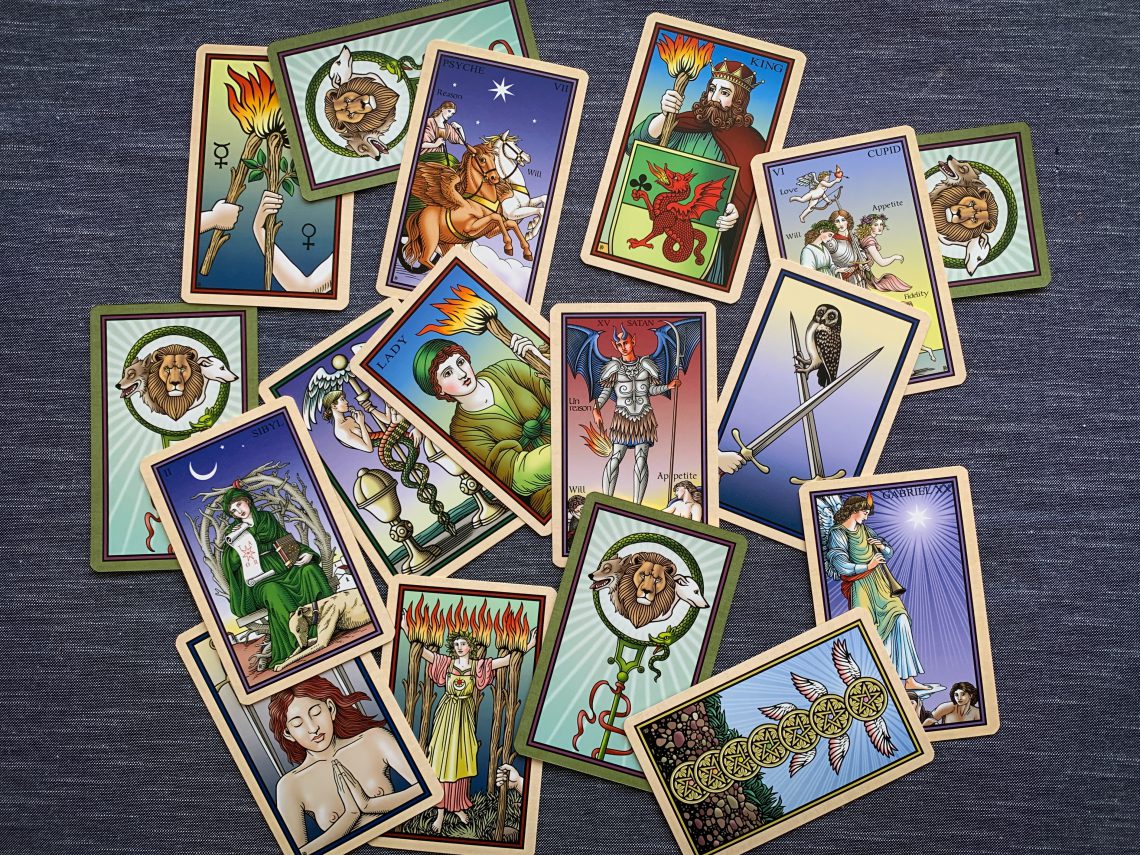 Which should I choose- Tarot or oracle?

It’s a question I hear often! Tarot is having a real moment (decade really, so far…) and with the options for self-publishing expanding, there are many unique and creative decks to choose from, in any artistic style or theme you can think of. Kickstarter has made it possible for independent artists to create and release the Tarot and oracle decks of their dreams, often with fun accessories and perks for early investors. (The Carnival at the End of the World Tarot that I carry in store began as a Kickstarter!) Art decks are achieving cult status with a collectors as a result of coverage on social media platforms like Zoom and Instagram. There are YouTube channels and podcasts devoted to them. The big publishers like U.S. Games, Llewellyn and Random House are catching on and releasing more unique projects. It is GREAT time for Tarot and oracle enthusiasts!

There’s a wave of vitality being brought to the art of Tarot and oracle now, and I just love it. Anyone who comes into the shop or who has attended one of my Tarot classes or readings knows that I am very passionate about the Tarot. In times of transition, periods of feeling stuck, during milestones and holidays, it is my go-to tool for self-inquiry and introspection. Oracle decks offer similar benefits, with a different format.

So what is the difference between a Tarot deck and an oracle? And how do we choose one?

The main difference between these two tools of divination is in their structure. The Tarot is an ancient and pre-existing system of divination. Traditional Tarot decks consist of 78 cards, consisting of the 22 major arcana (also called trumps, triumphs or Atu) and 56 minor arcana cards. The 56 minor arcana cards are further divided into four suits (generally wands, cups, swords and pentacles or disks) which represent the elements of fire, water, air, and earth. These suits are expressed in 16 court cards (kings/knights, queens, princes and princesses) and 40 pips, which are the aces through tens. Some modern decks have slight variations on the names of the suits and court cards, but the same structure is there, reflecting the polarities and the elemental vibrations.

The Tarot expresses powerful archetypal ideas in the form of pictorial keys. Within the trumps we find a doctrine of universal wisdom and a teaching tool for those who wish to study it deeply. In the minor arcana, we see these universal ideas further differentiated into more specific archetypal personalities, experiences, challenges and joys. This is how the Tarot tells the story of who you are, where you are, where you are headed, and what you need to know. I like to say that having a reading is a way of locating yourself on the map of your own Hero’s Journey. Learning the meanings of the cards in traditional Tarot deck takes some time and study effort, but it can be such an enriching pursuit, especially when paired with meditation on the cards and journaling.

Oracle decks differ from the Tarot in that they do not follow a set system. Their structure, symbolism and themes are decided by the individual creator and artist of the deck. Oracle decks tend to work with more specific themes than the Tarot, whether that be a spiritual system, works of art or literature, fantasy characters or myths. There may be more in-depth writings on each of the cards in the guidebooks, since the oracle is not relying on a known and much-studied system like the Tarot.

Many people find it easier to begin working with oracle decks, since they are meant to be read intuitively, or with the guidebook that comes with them. It is not necessary to memorize anything, unless you want to. With an oracle, it’s nice to draw a card or two and spend some contemplative time with the meaning of the card, reading the entry that accompanies it and meditating on the imagery and words. Some come with suggested layouts that reflect the theme upon which the oracle is built. Many oracles also have something to teach about their theme. In the shop, I carry several crystal oracles that can help you to learn the metaphysical properties of the stones when you select them for your reading. One deck teaches you mudras (hand gestures) for use in meditation.There are astrological oracles that also teach the correspondences of the zodiac and planets. Reading the description of the oracle on the box or website listing can help you determine whether the one you’ve selected also functions as a teaching deck.

What is the best way to select a deck?

I think this very much depends on your interests and what resonates and sparks delight for you! Above all, you will want to choose a deck with art that really speaks to you. Look for themes and artists you love. Do you enjoy animals, books or yoga? There is an oracle for that! Don’t be afraid to search out independently published art decks. Traditional Tarot decks range from historic reproductions like the Sola Busca to very modern, like The Field, with a diversity of body types, skin color, and genders. In some you will see the hand of the artist, while others will be be sleek, holographic, digitally rendered, like The Starman Tarot. If you flip through a few cards or view some images on the box and feel drawn in, curious, inspired, that’s a good sign that this is a deck you will enjoy and want to work with.

When first learning the Tarot, I usually suggest that new readers begin with a deck that clearly depicts the traditional symbolism in its card images. Some good options are the Smith-Waite or the Thoth Tarot, by master magician Aleister Crowley. These are two of the most popular decks in the shop. The Smith-Waite and Rider-Waite decks come in a variety of sizes, color schemes and formats and feature the iconographic Tarot illustrations of Pixie Coleman Smith.

Following some Tarot reviewers on YouTube and IG can help you get some in depth exposure to the images of new and classic decks, since most shops don’t have a complete example out for readers to view. Sometimes if you do a search for a particular deck online you’ll find someone who has photographed all of the cards. The intuitively suggestive meaning woven through the play of symbols, figures and color is going to be the most important key to learning the archetypal ideas embodied in your Tarot or oracle deck. So choose something that feels gorgeous and mysterious to you!

In the shop, I very much enjoy helping visitors find a deck that is just right for them. If you are interested in exploring oracle and Tarot, feel free to come by and let me know. I have the ability to special order items, and new shipments of decks arrive almost weekly. Follow the shop on Facebook and Instagram for product updates and Live videos featuring new decks in stock. Star + Splendor supports local and independent Tarot artists and publishers, so you will sure find something unique in our ever-growing stock!

Approximately every other month, I offer my Intro to Tarot class via Zoom or in-person (as safety allows.) This class covers the structure of the Tarot and the methodology of the cards, so that their meanings can be learned more quickly. We begin reading right away! If this is something that might interest you, be sure to join the mailing list or give us a follow!

The card images at the top of this post are of the Tarot of the Sevenfold Mystery, by Robert Place, which we carry online and in the shop.

Tomorrow is the LAST DAY to purchase a reading wit

New Roxx polish colors are finally on the way, aft

Cosmic Will determines and demands balance. We may

New to the shop, @spirittradingcompany doing what

Happy Solstice! May you bask in the radiant splend