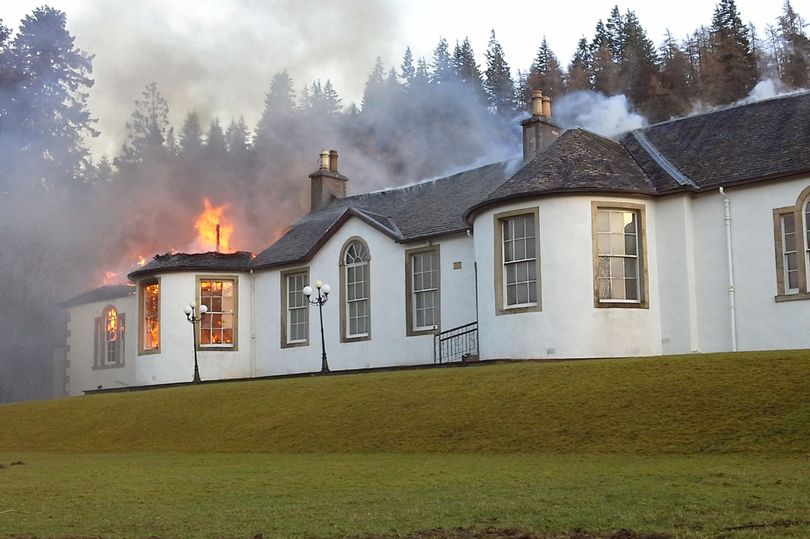 I had prepared a blog post about spiritual teachers, what to look for, what to avoid, but as I was putting the finishing touches on it, it suddenly came to my attention that tragedy has struck one of the places that is holy to me personally. And I had to take a breath.

Boleskine House, the former residence of famed and defamed occultist and ceremonial magician Aleister Crowley, has been set on fire in an act of vandalism. It is currently now burning and firefighters are trying to save what little they can. Recently purchased by The Boleskine Foundation, fundraising had begun and a comprehensive plan had been drafted for a complete restoration of the home on Loch Ness. It was to be brought to use for educational purposes, to host wellness and yoga retreats, and events for parties interested in its Scottish heritage and spiritual legacy.

From the Boleskine Foundation site:

In 1899, British poet, mountaineer and spiritual thinker Aleister Crowley purchased Boleskine for £2,000—twice its market value of the day. Crowley would place a great deal of importance on the house, as it held what he considered to be the perfect conditions for a spiritual retreat, offering the quiet seclusion amongst the bucolic landscape of Loch Ness.

It was here that Crowley is known for conducting an extensive practice known as the “Abramelin work.” Contrary to popular opinion in the press, the intention of this practice is not to summon demons, but rather to make personal contact with one’s Holy Guardian Angel through a rigorous and austere set of measures including devotion and prayer.

I am not one to get terribly emotional and upset about material things, but this one is hitting me a bit hard. I had hoped to someday visit Boleskine (I may still be able) once it was restored. I consider it a sacred place. My own spiritual practice involves a lineage, and this home is an important artifact of that lineage. I feel real sorrow that it is suffering such a setback.

I am recalling that I felt similarly a few months ago, as Notre Dame was burning. I did not yet know what was happening, but I felt off most of the day; low on energy, melancholic, with a nagging sense that something was wrong. I went outside in the evening to take care of my goats, and the wind was very loud and strong. I began my evening devotions and meditation with that wind whipping all around me on the hillside. It seemed to me an angry and sorrowful wind. At one point, I thought I heard shouting, but saw no one. I found myself choking back tears, and I didn’t know why.

When I came back into the house, I saw the news about Notre Dame, and I was very saddened. I have encountered, in a few different articles and blogs, the lore that Notre Dame (“Our Lady of Paris”) was built upon the site of a temple of Isis, erected by a tribe of Celts known as the Parisii during the Roman era of the 1st to the 4th century. I don’t see anything definitive about this, so I’ll keep searching and share what I’ve found.

I dislike anything that feels superstitious, but I would be willing to consider the idea that holy places could be inspirited. Years of religious fervor, intention, adoration and invocation… all the hopes and dreams of the people who came before… Perhaps that emotional imprint amounts to spirit of place? In any case, I feel concern and sorrow for it now.

Just a few days ago, a friend whose parents were taking a boat across Loch Ness had taken a picture of Boleskine and sent it to him. It shows a beautiful country hillside with the impression of a regal white house tucked in. Honestly, the house was already in ruins. But the picture shows that there was quite a bit standing solidly on that hill. It is no longer standing like this. I hope that the Boleskine Foundation may raise the necessary funds and be able to salvage some of the buildings to rebuild yet again. I’d love to walk there.

A tabula rasa ultimately implies hope, and to that I am holding fast. From complete and total destruction, new growth and possibilities may yet arise.

If you’d like to help, donations may be made to the Boleskine Foundation on GoFundMe.

Cosmic Will determines and demands balance. We may

New to the shop, @spirittradingcompany doing what

Happy Solstice! May you bask in the radiant splend

The Summer Solstice reading special is in full swi

A selection of the small journals that have just a

New to the shop! The Transient Light Tarot celebra