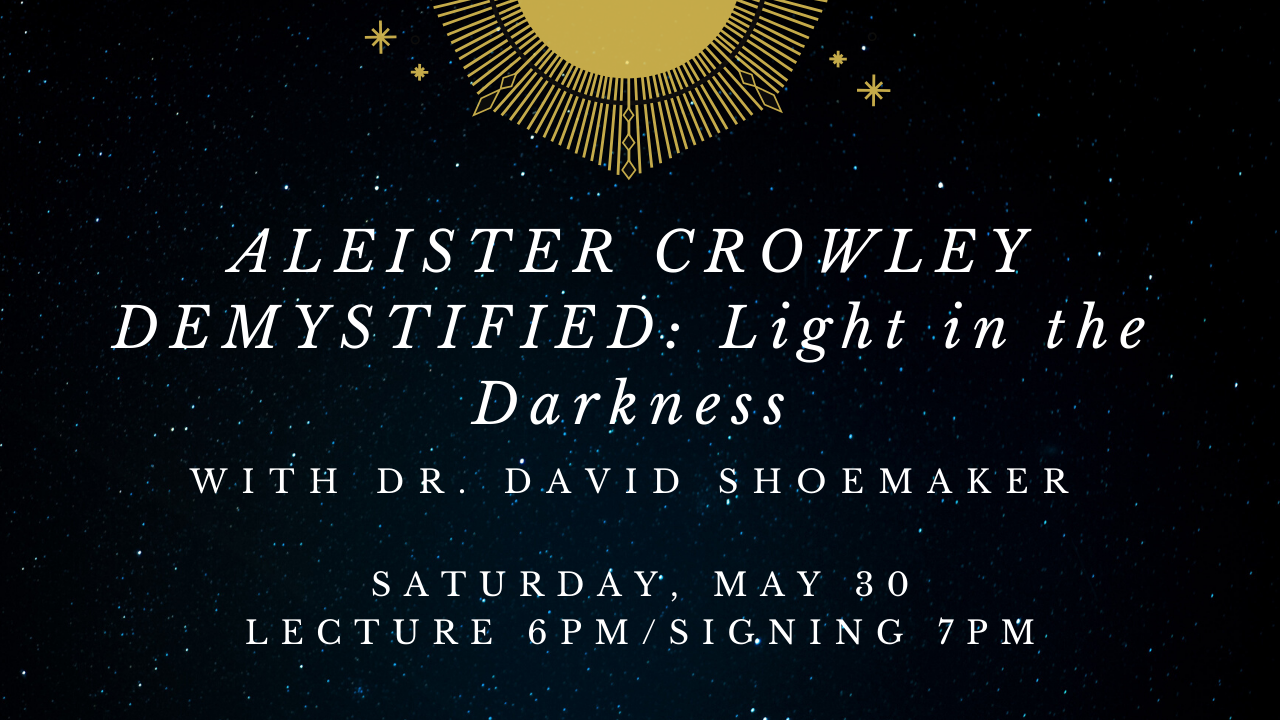 Due to COVID-19 guidelines, we must cancel this event and look toward a future date for rescheduling. If you have purchased a ticket, we have reached out to you via email. If you have any questions, contact Ami at shop@starandsplendor.com
Aleister Crowley Demystified: Light in the Darkness
6pm on Saturday, May 30
7pm Book signing & social hour
In this informative lecture, Dr. Shoemaker will explore the root principles of Thelema, the mystical and magical system of Aleister Crowley.
While sometimes appearing dark to the casual observer, Thelema will be revealed as a life-affirming path of freedom, power, wisdom and light, in harmony with other systems of personal and spiritual growth.
Special reference will be made to the work of Carl Jung and Wilhelm Reich–two 20th century psychiatrists whose work parallels that of Crowley in many ways.
********
About the speaker:
Dr. David Shoemaker is a clinical psychologist in private practice. He has been a member of Ordo Templi Orientis (O.T.O.) and A∴A∴ since 1993, and he has many years of experience training students in these traditions. He is the Chancellor and Prolocutor of the Temple of the Silver Star, a Thelemic educational and initiatory Order (totss.org), and a Sovereign Grand Inspector General of the US Grand Lodge of O.T.O.
David’s popular “Living Thelema” podcasts have appeared regularly since 2010, and his widely praised Living Thelema book was published in late 2013. His 2016 publication, The Winds of Wisdom, contains a full record of his scrying of the Thirty Enochian Aethyrs, and his latest work, co-edited with Lon Milo DuQuette, is Llewellyn’s Complete Book of Ceremonial Magick.
Books will be available for purchase and signing at this event.

We’re doing Staff Picks this week, and will cont

Today through Monday, the entire shop is 20% OFF.

Because I love you, I know how much you love my fr

We have adjusted hours for today and Friday, and I

Guys, it’s my favorite candle of all-time by @sp